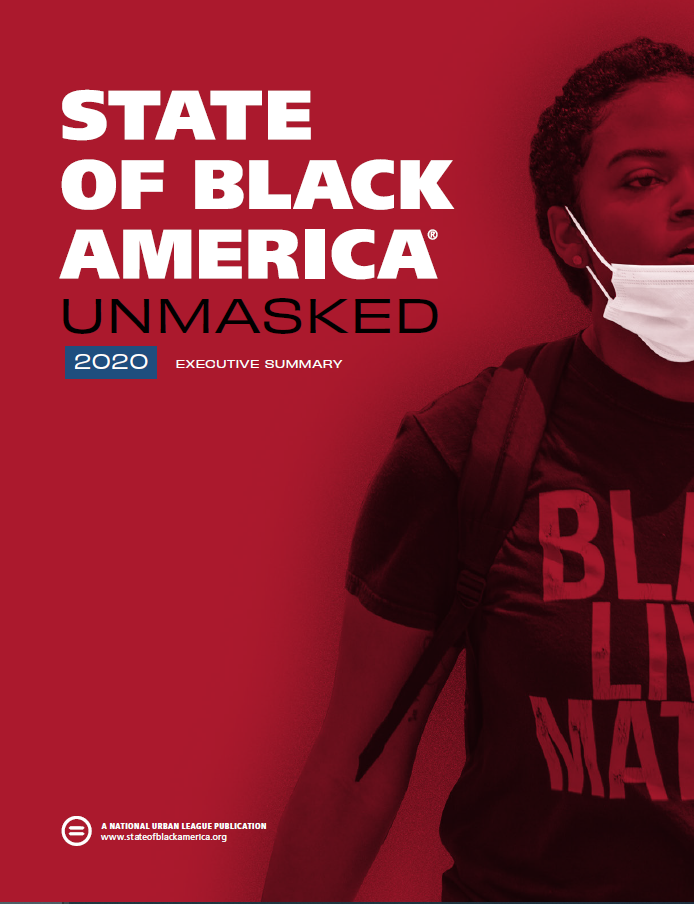 The National Urban League’s 2020 State of Black America report, “Unmasked,” explores the various ways that that the coronavirus pandemic has revealed the face of racism in America – particularly within our economy, our health care institutions, and our justice systems.

“Like an earthquake exposes the fault lines in the earth; the COVID-19 pandemic exposed the fault lines in America’s social and economic institutions,” National Urban League President and CEO Marc H. Morial said. “The expansion of health care coverage under the Affordable Care Act, which coincided with a decade-long economic expansion, partially masked the health care and economic disparities festering just beneath the surface. Now they are unmasked.”

The report includes a partnership with the Johns Hopkins Center for Health Equity, which demonstrates that as states began to collect race-based data about the pandemic, a bleak picture emerged: Black, Latino and Indigenous people were getting sick and dying in higher numbers.

Furthermore, Black patients have tended to be far sicker when they finally receive treatment, partly because they are less likely to have health insurance, but also because of systemic racism in the health care system that downplays their symptoms.

The rage that erupted in response to the death of George Floyd and other police killings, was like a match dropped into a powder keg of grief, Morial said.

“Against the grim backdrop of an exploding public health crisis, the nation watched as a Black man was denied his God-given right to breathe, losing his life under a police officer’s knee pressed into the back of his neck for almost nine minutes, Morial said, noting that Floyd’s last words, “I can’t breathe,” became emblematic of more than Floyd’s personal struggle in the moment. “Our reporting revealed the common denominator in the alarming and disproportionate ratio of Black people left gasping for air in emergency rooms and at the hands – and knees – of law enforcement: centuries of systemic racism.”

Among Morial’s “19 Lessons of COVID-19,” explored in detail in the report:

The 2020 Equality Index, a calculation of the social and economic status of African Americans relative to whites, is 73.8%.  Rooted in the Three-Fifths Compromise of 1787, which counted enslaved African Americans as “three-fifths” of a person, the Index would be 100% under full equality. The 2020 Hispanic Index is 78.8%

Morial noted that, while the 2020 Equality Index does not capture the effects of the coronavirus pandemic or the resulting economic downturn that began in February 2020, it does reflect long-standing racial and ethnic disparities across nearly every area of American life than have been “unmasked” during these concurrent crises.

The categories that make up the Equality Index are economics, health, education, social justice and civic engagement. Improvements in one category are sometimes offset by losses in another area, leaving the overall index little changed.